The O'Fallon Public Library is located at 120 Civic Plaza (behind the Post Office). The library provides services to the more than 30,400 residents living within the O'Fallon city boundaries. It is a municipal library supported by the City of O'Fallon.

In total, almost 350,000 items were checked out in FY 2018/19. In addition, 174,000 people entered the library to utilize print and electronic reference resources, use a study room, access the internet through the library’s high speed internet connection using library computers, enjoy Wi-Fi service, or attend one of the libraries almost 600 programs for all ages.

Our friendly and professional staff is eager to serve you. Welcome to the O'Fallon Public Library!

The library completed a $1 million remodel and renovation project in 2016 and continue to upgrade and add services as needed.

It is the mission of the O'Fallon Public Library to facilitate and promote lifelong learning, to emphasize and encourage reading, and to provide resources, services, and programs meeting the needs of our diverse community. 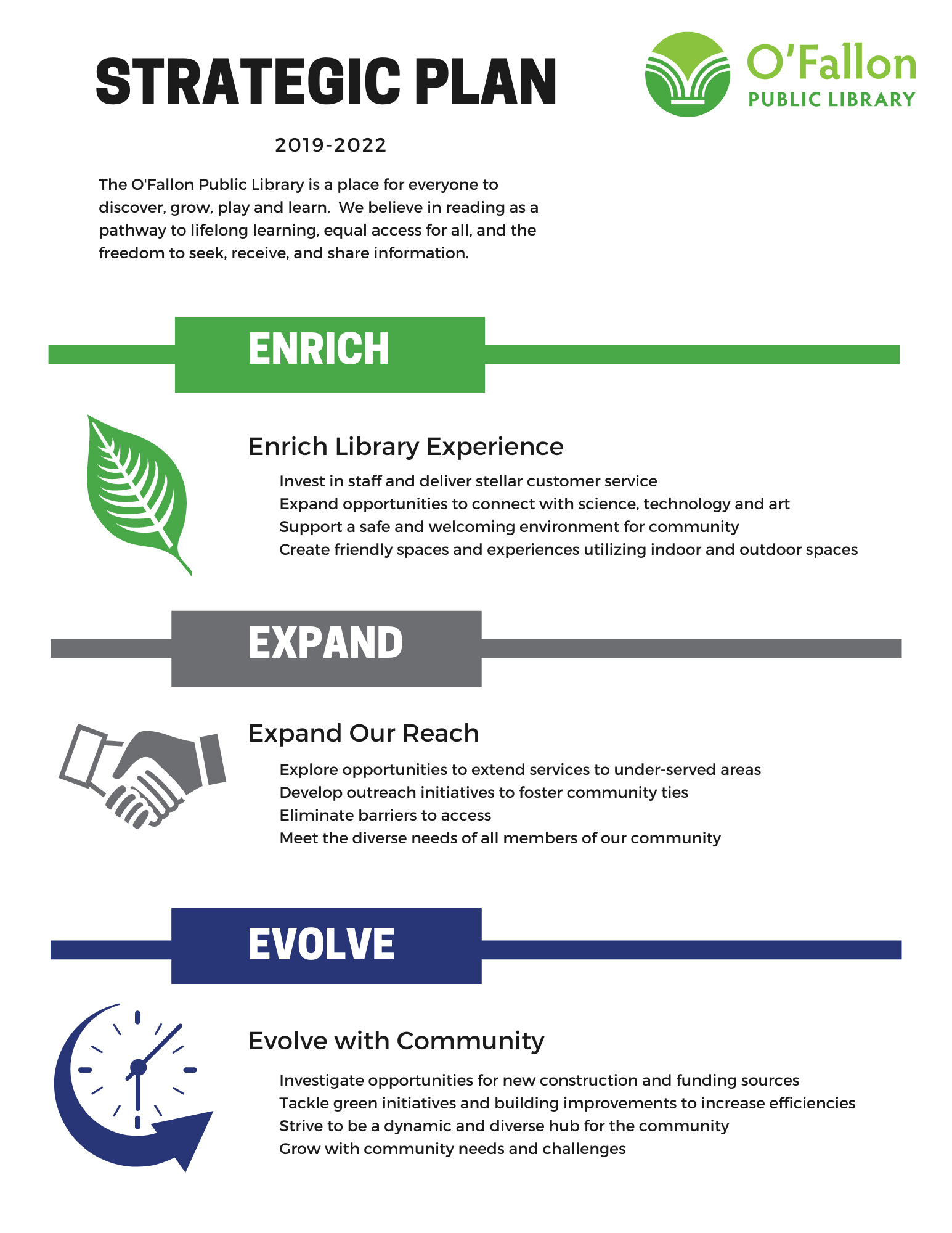 The library is open the following hours.  Holidays and inclement weather may impact our normal schedule.  You can check our website, or follow us on Facebook for any announcements concerning closures.

The Library is closed on the following holidays:

Library hours are subject to change and the Library may close due to severe inclement weather or other unforeseen emergencies. Closing announcements will be made on the Library's homepage, as well as on Facebook.

Vernon Ohlendorf was a library board member and lifelong library user. The library hopes to honor Mr. Ohlendorf's legacy with a substantial addition to and renovation of the current library.

From the O'Fallon Progress, May 29, 2008
By Daniel Kelley, Progress Editor (Reprinted with permission of Mr. Kelley)

Vernon Ohlendorf was a familiar figure within the book aisles at the O'Fallon Library and his memory will live on through a $1.6 million donation given to the library upon his death in March.

Friends and relatives of the lifelong O'Fallon resident said he quietly set aside the money before his unexpected death on March 16.

Ohlendorf, 65, bequeathed the library donation along with $255,000 to the O'Fallon Township High School Endowment Fund in his will. He also established a trust fund for the library and endowment fund that is in dispute in probate court.

Ohlendor's cousin Evelyn Frerking of New Baden said she knew the library meant a lot to Ohlendorf, but did not know of his planned generosity.

"I wasn't aware of (the donations) until after he died," she said.

Ohlendor was a member of the O'Fallon Library Board of Trustees and the board of directors of the OTHS Endowment Fund.

The O'Fallon City Council recognized Ohlendorf's contributions with the declaration of May 19 as "Vernon Ohlendorf Day" during the May 19 council meeting.

O'Fallon Library Director Molly Scanlan said Ohlendorf is missed at the library where he was a regular patron.

"He apparently had used the library his entire life along with his parents," Scanlan said.

Scanlan said Ohlendorf briefly mentioned his planned donation during a chance run-in at the grocery store, but she did not know the extent of his philanthropy.

"At the beginning of April, we knew we were going to receive $386,000 and we though 'Wow that's a lot', but that was just from one bank," Scanlan said.

Scanlan said the library has established a planning committee to oversee the donation. The money will likely be used for capital improvement as city population boost has caused the need to expand the 16,000-square-foot library.

Frerking said she always believed Ohlendorf was a reserved person, though, she saw a new side of him when she met many of his friends.

"I thought he was a private person, but after his death so many people came up to me to talk about him I seen a different side of him," Frerking said.

He was a retired teacher with the East St. Louis School District and a part-time employee of CVS in O'Fallon. He also had earned a doctorate of education from Southern Illinois University Edwardsville.

Ohlendorf was a bachelor with few surviving family members.

The Library received an additional $100,000 from the Ohlendorf Estate in 2011 bringing his total donation to the Library to over $1.7 million. The Ohlendorf funds are no longer in probate and are held in an interest-bearing account that is separate from Library's general budget funds.

This money is being held to be used in the future for a new Library or major expansion. This was Mr. Ohlendorf's wishes and a condition of the Ohlendorf Trust of which the library is also one of three beneficiaries that "his donation should be used for building construction" and not to be used for general library operations.